Don't Get All Mall Ninja

All this Zombie Apocalypse stuff is fun.  But, don't let it all go to your head.  If you're prepping for a disaster, don't go overboard and turn into a mall ninja.  All mall ninja is someone who buys a bunch of totally bad ass, professional level, gear and completely over prepares for something that is very unlikely to happen.

Posted by GatorDude at 11:09 AM No comments:

In a world full of Zombies, a big knife might make an effective last ditch weapon.  When people fight zombies in the movies or on TV, they usually use firearms or chainsaws.  But, when you are eyeball to eyeball with slimy rotten Zombie don't underestimate a good knife.  You can usually reach and deploy a knife fast and you don't have to fumble with safeties or sights.  The knife is a very instinctive weapon that everyone knows how to use.  It can re-kill a Zombie outright or can deny it mobility by cutting tendons and other vital parts.

I've got two big hunting knives that just might do the job against a Zombie in close quarters combat.  If a SHTF-scenario comes up, it's reassuring to have a good solid knife readily available.

Posted by GatorDude at 2:00 AM No comments: 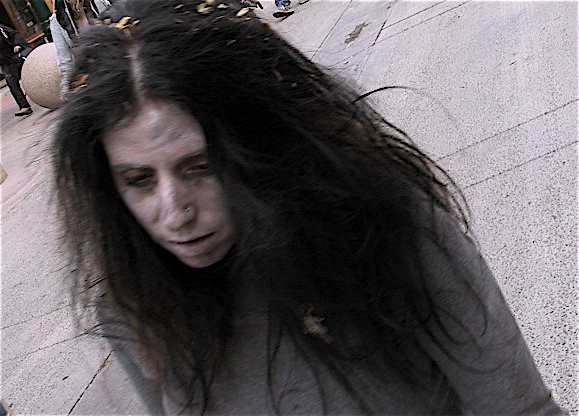 Posted by GatorDude at 12:30 AM No comments:

If the Zombies come, you're gonna need a nice truck!

If the Zombies come to your town, you are going to need to get out of town quick!  You'll need a good, solid, bug-out vehicle (BOV).  You know like this one . . .

This one would be able to squish Zombies.  But, you may simply need to evacuate using your current vehicle.
Posted by GatorDude at 1:00 AM No comments:

Stop Zombies at the Front Door!

If there is one final place to stop Zombies, it is your front door.  Your home is your castle.  It's your citadel against all that is smelly, vile, and undead!  Hopefully your home has stout doors of steel or solid wood.  When fighting zombies, a solid door with good locks and a peephole is a lifesaver.  You don't want a glass door or a door flanked by windows that would allow wandering zombies to see inside your home.  Once you a safely inside, you'll want to barricade yourself in.  Heavy furniture can help block an entrance.  However, bulky items also make it tough to escape.

One thing I've used to keep roaming bands is the charley bar.   You can read my  review of the Masterlock Dual Function Door Security Bar.  It works well in keeping out burglars and unwanted maintenance people.

Posted by GatorDude at 1:00 AM No comments:

Weapons for the Zombie Apocalypse

Are you ready to fight zombies? If the undead hordes ever come shuffling your way, here are some weapons to consider.

Once again, AMC television's "The Walking Dead" has captured the American imagination. Every week this fall, millions of viewers will be tuning in to learn valuable lessons about survival, life, love, family, friendship, and killing legions of nasty, putrid, rotting, zombies. As the relentless gripping and grim episodes roll by, many viewers will probably wonder what kind of weapons would work well against zombies. If the undead hordes ever come shuffling your way, here are some weapons you might consider:

1. The Crossbow. If one weapon is the star of "The Walking Dead," it's the crossbow. It has the power to penetrate a zombie skull and it's quiet so it doesn't attract even more zombies. Since it has a low rate of fire, the crossbow isn't great for taking on vast hordes of zombies. As of this October 2011 writing, the Bass Pro Shop has a crossbow called Wicked Ridge by TenPoint Warrior on sale for $379.99.

2. Compound Bow. If you don't have a crossbow, a compound bow might be a good substitute. It can generate plenty of power and is very accurate in the hands of a skilled archer. You may want to get lessons and start practicing before the walkers come shuffling your way. A quality compound bow will set you back $300 to $500.

3. Axe. The axe and all of its derivatives are effective weapons against zombies. The hatchet and tomahawk are small variants that can be weilded in confined spaces by a person of normal strength. Larger axes like a fireman's axe can be more powerful, but require far more strength and athleticism to wield effectively. If you are looking for an effective weapon, the SOG FastHawk Straight-Edge Tomahawk is $39.99 from BassPro Shop.

4. Polearms. Polearms like pikes, lances, halberds, and spears can be effective against zombies. They allow you to physically strike zombies from a distance. Pole arms are also effective when used by groups employing appropriate tactics against zombies. Perhaps the most effective of the polearms would be the boarding pike. Boarding pikes were once used in the age of sail by Navy or pirate crews when boarding another sailing vessel. These short stout polearms are designed for hand-to-hand, close quarters, combat within the tight spaces of a ship. The basic spear could also be effective against zombies. The basic medieval Boar Spearhead is available from a variety of knifemaking supply companies.

5. Survival Knife. A heavy bladed Bowie or K-bar hunting knife can be a powerful close quarters weapon against zombies. In the popular AMC television series, "The Walking Dead," survival knives were used successfully in last ditch fights against zombies. If you are on a tight budget, Harbor Freight sells 8-inch Survival/Hunting Knives for less than $10. It has a hollow handle packed with useful survival items like matchs, fish hooks, and fishing line. If you are looking for a higher quality hunting knife, Walmart sells the American-made Buck 119 Special Hunting Knife for less than $50.

6. Handgun. The handgun of Deputy Rick Grimes on "The Walking Dead" is quickly becoming an iconic firearm. He carries a .357 Magnum Colt Python. It is a high quality handgun with a smooth trigger and powerful payload. While semi-automatic pistols have generally supplanted revolvers in police patrol service, the Colt Python is a very effective home defense weapon.

7. Hunting Rifle. Finally, scoped hunting rifles are excellent choices for defense against zombies. Accurate headshots are required to permanently take down zombies. According to the Internet Movie Firearms Database, the scoped hunting rifle used most commonly in "The Walking Dead" is the Ruger M77. It's a worthy choice for hunting and target shooting.

Of course, zombies are horror movie fantasies and weapons are a very serious business. If you ever even touch a firearm, you should be well-versed in the fundamental gun safety rules. You should also know all of the gun safety rules from the NRA.  Have fun thinking about zombies, but prepare for hurricanes, tornadoes, earthquakes, fires, and other more likely disasters.

How to Survive Zombie Attacks!

Zombies!  There's nothing scarier than the prospect of being ripped apart and eaten by a horde of rotten, nasty, putrid, zombies.  Unfortunately, movie and television characters never seem to know how to fight off zombies.  They run, they split up, they fight ineffectively, they get distracted, and they die. 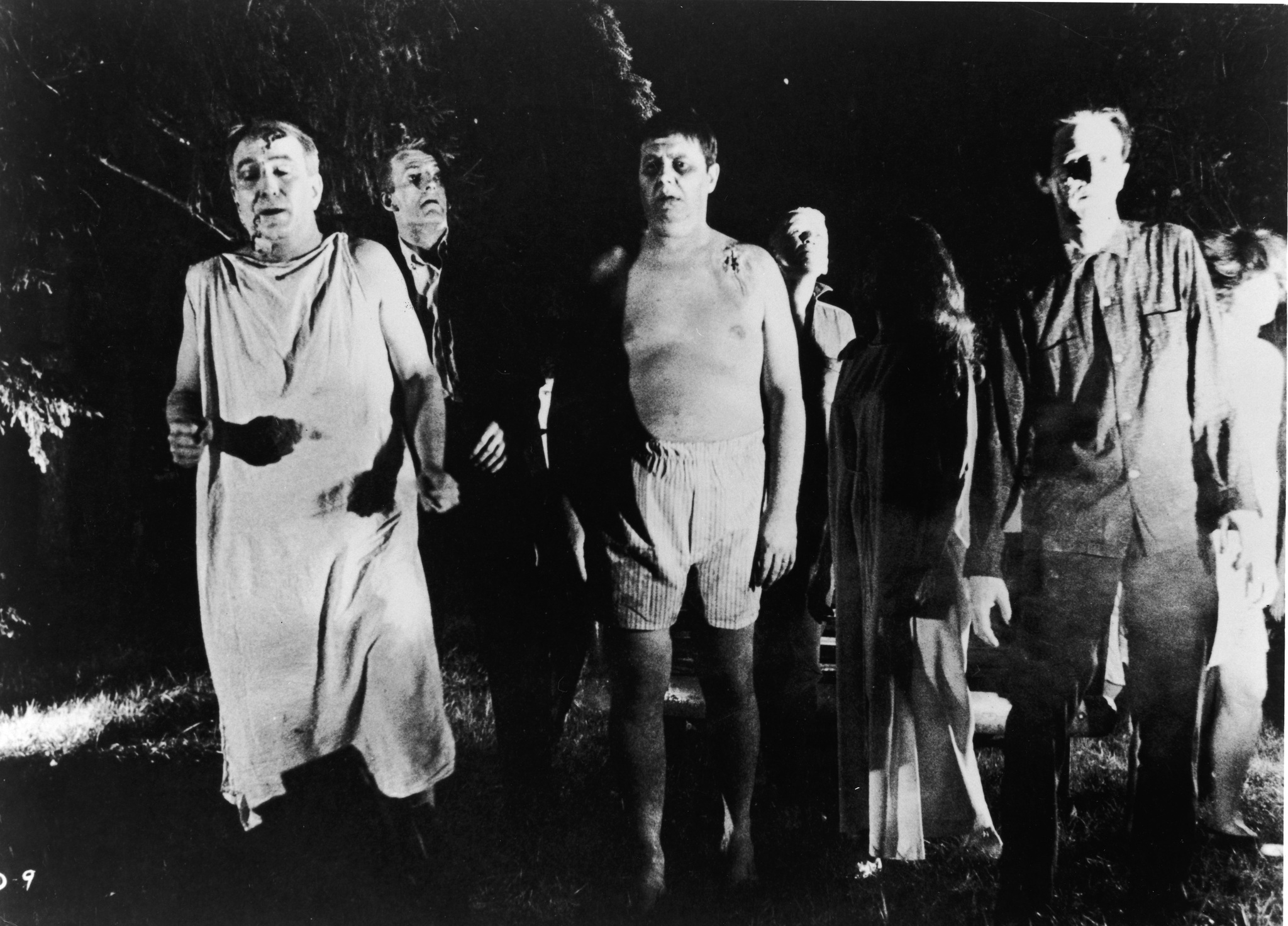 Fortunately, if there ever is a zombie apocalypse, you can be prepared and you can fight effectively!  If you follow basic infantry tactics that have been around since Roman times, you can prevail against the undead!

Posted by GatorDude at 8:39 PM No comments: