How to Make Your Own Protective Mask

One thing that you'll notice in the Asian countries that are grappling with Corona or Covid-19 virus is that many people try to protect themselves by wearing masks.  Doctors and medical professionals in the United States initially told the public that we don't need masks and that they would be unlikely to fit us well if we had them. However, the thinking about mask is starting to change and now the CDC recommends a simple cloth mask.  A mask will provide a measure of protection for wearers and also keep an asymptomatic infected person from breathing on others.

Here is a link to the CDC recommendation on masks.

You can easily make a simple cloth or paper mask at home.  Here are two designs that I found on Youtube.  Again, I'm not a medical professional and you'll have to assess these designs on your own.


Finally, if the CDC has changed their mind about masks, can recommendations about goggles or glasses be far behind?  Stay safe.  Stay home.  Maintain strong social distancing.

Email ThisBlogThis!Share to TwitterShare to FacebookShare to Pinterest
Labels: how to make a mask, make a mask to avoid the corona virus, make a protective mask, make your own mask

This blog is about surviving the zombie apocalypse.  I've always thought that if you were ready for our favorite fictional bogeyman, the zombie, you'd be ready to face other challenges like natural disaster.  Now, the entire world is facing the Covid-19 virus pandemic.  It's caused thousands of deaths and it may be with us for awhile.  That means we have to do what we can to protect ourselves and our families.

I am not a doctor or a medical professional.  Therefore, I suggest you visit the -

In this emergency, we all have to work together to stay apart and maintain social distances of 6 feet or more from other people.  The Corona Virus can survive on surfaces for long periods of time and is easily spread.  You'll want to wash your hands thoroughly and take appropriate precautions.

One thing that everyone should know is that the corona virus is not the zombie apocalypse.  There is no breakdown in civil authority.  Goverment at every level and industry is working together to ensure that our country will fight the virus and that our society will emerge intact.  If you were prepared for this sort of emergency, that is great for you and your family.  However, it is too late to start hoarding food and toiletries now.  Now is the time to take what you need and leave some for others.  That reduces stress on the supply lines we all depend on and gives the stores time to replenish their shelves.

Stay calm.  Think about minimizing your time among others.  Don't hoard.  We will all get through this health emergency.
Posted by GatorDude at 9:35 PM No comments:

Email ThisBlogThis!Share to TwitterShare to FacebookShare to Pinterest
Labels: Covid-19, Covid-19 and zombies, this is not the zombie apocalypse

How to Build a Survival Stove

If civilization ever collapses and leaves us without electricity and cooking gas, we'll need to know how to create a stove and get things cooking again.  Fortunately, there are many ways to build a stove.

One stove design that can be very useful in developing countries and survival situation is the Rocket Stove.  A rocket stove uses the principals of a chimney to build a very efficient stove that runs well on scrap wood, twigs, and other easily collected materials.  These videos from Youtube show how to construct a rocket stove from simple materials like bricks or cans.

This first build uses bricks to create a rocket stove.  It's an easy to see how this stove is easy to start and feed using sticks and kindling.


This second rocket stove was created using cans and small pebbles.  These sorts of stoves provide portability.  One note of caution, while traditional cans are usable for a rocket stove, galvanized buckets and cans release dangerous zinc fumes when heated.  Since these zinc fumes are toxic and will contaminate foods, don't use anything galvanized for stove construction.

Posted by GatorDude at 7:35 PM No comments:

Email ThisBlogThis!Share to TwitterShare to FacebookShare to Pinterest
Labels: apocalyptic cooking, emergency stove, how to cook in an apocalypse, rocket stove, survival stove

I haven't posted on this blog for a long time.  But, I wanted to take a moment to tell you about a Zombie Apocalypse novel that I recently read.  It's Night Zero by Rob Horner.  It's an excellent novel that brings us into a zombie apocalypse from the perspective of victims, first responders, emergency room staff, and even zombies. 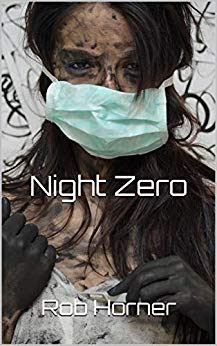 I liked this book because it provided a very plausible scientific reason for the outbreak of a zombie-like disease.  The author has a medical background and brings it to bear on the topic with a deep knowledge of biology, medicine, and the workings of paramedics and small to mid-sized hospital emergency rooms.  Best of all, he brings all this knowledge to bear without getting too explanatory or subjecting us to a prolonged essay on viral diseases.  The author's knowledge adds realism to the story and adds to the terror.

I'm not big on book reviews that have spoilers.  I'll just say this:  if you are a fan of the Zombie Genre, you need to buy this novel!

Posted by GatorDude at 3:13 PM No comments:

Guns versus Knives during a Zombie Apocalypse

In a Zombie Apocalypse scenario, do you choose a gun or a knife for your primary weapon?  It's a big decision and it's a topic for vigorous debate.


If you use a knife, hatchet or tomahawk for a primary weapon during a zombie apocalypse, you are choosing to fight zombies on an up close and personal basis.  But, you'll never run out of ammunition, you'll never experience a failure-to-fire (or jam), and you'll be fighting far more quietly than someone armed with a firearm.  When you fight, you won't be alerting and attracting zombies for miles around.  These are powerful advantages.

However, the knife has some disadvantages.  If you are fighting zombies up close and personal, you are going to get zombie blood on your hands and in your face.  In the movies and lore, it's the bite of the zombie that turns you into a zombie.  But, if there were ever a real life zombie apocalypse, the germs, viruses, or bacteria that turn people into zombies would likely get all over you if you were fighting zombies with a knife, bat, or hatchet.  Plus, zombies don't get tired and living people do.  That leads us to the gun argument.

If you want to fight zombies from a distance, you'll need something that can reach out and touch them at range.  In modern times, ranged weapons include bows, crossbows, slingshots, and firearms.  Bows and crossbows offer the opportunity to engage zombies from a distance and make less noise. However, they are limited in range, slow to reload, and to some extent depend on human strength.  Firearms come in a variety of styles, calibers, and ammunition capacities.  However, most modern semiautomatic rifles can be reloaded quickly when compared to a bow or crossbow.


The drawbacks to firearms are that they make noise and require expensive ammunition.  Some people believe that gunshots would attract the attention of zombies and draw them towards the shooters.  Others believe that the threat of attracting zombies is overstated and that the sounds of shots will echo off of buildings and confuse listeners.  Sounds suppressors are also an option for firearms, but they require special background checks and tax stamps for use.  Personally, I like the firearm option and would love to have a stockpile of reloading supplies so that I could reload ammunition.

Where to Go In A Zombie Apocalypse

I recently came across an interesting article by Xavier Remington of Paranormal Investigators about where to go during a Zombie Apocalypse.  While I don't agree with every point, it definitely addresses some of the key considerations about assessing your situation, getting ready, and getting to a safer location.  Here is the article for your enjoyment:


Where Should I Go During A Zombie Apocalypse?

Email ThisBlogThis!Share to TwitterShare to FacebookShare to Pinterest
Labels: bug out locations, bugging out, evacuating by car, where to go during a zombie apocalypse

It's just a simple mnemonic device. But, it is a device that may work for eluding home invaders and other threats.