Physical Fitness, Sheltering in Place, and the Zombie Apocalypse

When the Zombies come, some experts believe that physical fitness will be key to escape and survival.  When states were ranked on their ability to survive a Zombie Apocalypse, states that had more participation in fitness activities were ranked higher than states with couch potatoes.  If you are at school, work, or Walmart, when Zombies show up, you'll need to be quick on your feet.

However, one alternative way to survive a Zombie apocalypse is to not go out of your house and fight with zombies.  If you have enough food, chips, soda, and reading material stockpiled, you might be able to shelter in place.  Typically sheltering in place is a recommendation by authorities when their is a chemical or biological pollutant that has been released into the atmosphere and it's dangerous to go outside.  Here is an American Red Cross data sheet on how to shelter in place.  In case of Zombies, staying inside probably beats running outside and fighting with them.  If you've got the necessary supplies, you could just barricade yourself in and sit the whole Zombie apocalypse out.  Of course, you'll need water.  According to ready.gov, a person needs 3/4 of a gallon of water per day for drinking and another 1/4 gallon for sanitation.  More is needed in hot climates.  If Zombies are wandering animated corpses in various stages of decomposition, it stands to reason that the Zombie threat will simply bio-degrade eventually.

Of course, high cholesterol and hardened arteries might be a bigger threat than zombies.  So, it would be prudent to be fit.  Start slow and increase your physical activity.  In the event of a catastrophe, the ability to run, jog, or even walk a few miles would be reassuring.
Posted by GatorDude at 12:00 AM No comments:

The Zombie Apocalypse Will Be Hard On The Knees

War isn't easy on the knees.  The rigors of vigorous physical training, heavy body armor and packs, and long hours on the march take a toll on the bodies of soldiers.  According to this Stars & Stripes article, many soldiers end up developing degenerative arthritis at a young age. Between 1998 and 2008, military doctors diagnosed over 100,000 cases of the disease.  Overall soldiers were 26% more likely than the general population to develop the incurable disease.  It's just one of the many ways that our soldiers develop injuries and health problems that most of us don't even think about.


Here's the thing:  degenerative arthritis is a disease affected soldiers who were in peak physical condition.  If the Zombie Apocalypse ever happens, it will be even harder on the knees of all us overweight computer nerds who sit around reading about Zombies on the internet. That would be us!  We're going to need some knee protection and some techniques to avoid knee injury.

Research by the military in the United Kingdom has found that military recruits who follow a strict regimen of leg stretches and exercises to strengthen the knee can avoid many common knee injuries.  This article by a former Navy SEAL provides some good stretches to help avoid knee injuries.

9/11 and the Zombie Apocalypse

This site is only about preparing to survive a Zombie Apocalypse.  It's about fighting for humanity and going toe-to-toe with animated death.  It's about dealing with an cold, inhuman, unthinking foe who wants to kill us, eliminate us, consume us, and convert us into their own mindless form of "life."


Thinking about how we could face down such a foe, prevail, and restore our way of life is an interesting exercise.  Perhaps the thinking and the preparation, will also prepare us to face any future disaster or challenge that comes our way.  The fight against Zombies isn't handled by the government or the military.  The fight against Zombies is handled by the American people with each family and each community refusing to die, rallying against the dead, facing them down, and putting them permanently in the grave.

The Zombie Apocalypse is a fictional reminder that we, the people, are the militia.  Ultimately, we are responsible for defending ourselves, our families, our communities, our countries, and our cultures.  The Zombie Apocalypse is something fictional and entertaining to think about.  However, every so often there comes a day that reminds us that not every apocalypse is fictional.  On the morning of September 11, 2001, we weren't thinking about the end of the world. But, then a band of Islamic hijackers took over four airliners.  They crashed three of those airliners into the World Trade Center and the Pentagon.  The fourth airliner crashed in a Pennsylvania field after passengers stood up, looked death in the face, and prevented another suicidal crash.  The fourth airliner was destined for the U.S. Capitol.  It was an attempt to decapitate our nation's government.

As we prepare for the Zombie Apocalypse, we accumulate water, food, firearms, ammunition, knives, sharp pointy sticks, first aid supplies, and other survival equipment.  If the Zombie Apocalypse ever comes, we'll be ready.  But, don't think we have forgotten about 9/11.  We remember who funded the 9/11 hijackings and where the hijackers came from.  We remember who danced in the streets and we remember where.  We won't ever forget about 9/11.  It wasn't a tragedy or an accident.  9/11 was a deliberate attack.  We won't fall for false conspiracy theories about 9/11.  We know where the conspiracy was hatched and by whom.  It's been 15 years now, but we won't ever forget.  If some mindless death cult attacks us again, we'll all be a little more ready.

Ironically, the government that the terrorists tried to destroy moderates public anger about 9/11.  It reminds us not to discriminate.  It exhorts us not to hate.  It shields us from the 28-pages of the 9/11 commission report that point a finger at a foreign government.  Perhaps such moderation is proper in a world where we as a nation have nuclear weapons at our finger tips.  Those are big issues to ponder.  But, this site is just about preparing for the Zombie Apocalypse.  There's nothing to see here.  Move along.  Remember the victims of 9/11.  Remember the soldiers who have died in the wars spawned by 9/11.

Posted by GatorDude at 12:13 AM No comments:

Email ThisBlogThis!Share to TwitterShare to FacebookShare to Pinterest
Labels: 9/11 and the Zombie Apocalypse, 9/11 attacks, preparing for another 9/11, Remembering 9/11, zombies as a metaphor, zombies as euphamism

If the Zombies come to town, you'll want to have some canned food on hand.  While we've grown accustomed to fancy Food Network chefs,  when the Zombies come, I highly recommend eating anything by Chef Boyardee.

A can of Chef Boyardee ravioli can be eaten hot or cold.  It has a convenient pop top lid for life on the run.  It only costs a dollar a can at Dollar Tree.  Best of all, the best by date indicates a shelf life of at least two years.  If you are prepping on a budget, you can't go wrong by throwing a couple of extra cans in your shopping basket on a regular basis.  Doing a little bit at a time is the poor man's way of prepping. 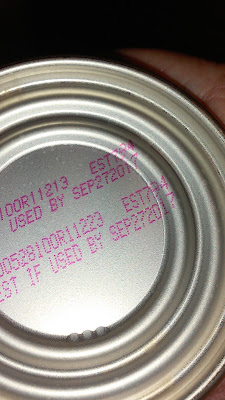 In the long term, you and your loved ones probably won't want to eat Chef Boyardee each and every day.  By day 47, you might want something else!  That's why you may want to stockpile emergency food now.  Several companies offer freeze dried and dehydrated meals that are suitable for long term storage.  For example, the Wise Company offers a 52-serving package of breakfasts, lunches, and dinners with an up to 25 year shelf life.