How Big of A Threat Are Zombies?

This blog is about Zombies and how to fight them.  But, you should carefully consider all the threats that might realistically visit your home and family.  Make a list of them.  Are you in a hurricane zone?  Are you near a major earthquake fault line?  Is your neck of the woods a tornado alley?  Are your neighbors likely to riot if they don't like a jury verdict?

You have to think through all the threats you might face and rank them.  For most of us, Zombies are actually fairly far down on the list.  For realistic preppers, Zombies are a metaphor for other threats like large scale civil unrest, the break down of civil authority, and contagious disease.  While Zombies might not make your list of threats, these other unpredictable threats might.


As you prepare for a Zombie apocalypse, you'll find yourself ready to handle all manner of other catastrophes.  For example, the weapons you have can help repel home invaders or looters.  The food and water stockpiles can help you in the aftermath of a hurricane, earthquake, flood, or tornado.  The batteries you have for your radios can help you stay informed when the power is out.  The first aid kit you bought can help you handle the cuts and scrapes that come with a tornado strike.


You Can't Prep for Everything is an interesting article on RealWorldSurvivor.com on how to think through the threats that you might realistically face and focus your prepping efforts.

How Does A Zombie Virus or Infection Spread?

Survivors worry about how the Zombie contagion spreads.  It's only natural.  In the event of a real zombie apocalypse, it will be the number one question on almost everyone's mind.  Those who aren't thinking about it will be shuffling in our direction with primitive thoughts of how tasty the rest of us will be.  Unfortunately, there is no definitive answer.

No one knows how a real Zombie contagion might spread!

In fiction, Zombie virus or bacteria usually spreads through a bite.  This implies that the primary vector for Zombie infection is saliva.  But, in a real world Zombie apocalypse, the methods of transmission may vary or be altogether than genre fiction depicts.  Information passed along by authorities may be contradictory or completely wrong.

What does this mean for you as a prepper?  Maybe means yes.  For safety sake, you have to assume that Zombie virus can be spread by bites, scratches, drool, blood spatter, intimate contact, and possibly even Zombie breath.


How Do You Protect Yourself Against Zombie Virus or Zombie Infection?


The uncertainty over how the Zombie contagion spreads means that survivors should take extra precautions.  This means engaging Zombies from stand off distances (with a rifle or crossbow instead of a knife) and wearing protective gear for close encounters of the Zombie kind.  It's highly likely that government soldiers would engage Zombies while wearing heavy duty protective gear designed to offer protection from chemical and biological weapons.


As civilians, we might not have access to military grade chemical warfare gear.  The surplus gear that is available may be old, moldy, out-dated, or in need of unavailable filters.  A better alternative would probably be to procure modern face shield and respirator used by painters and mold remediation experts.  This will allow you to easily find replacement filters.

If you simply want to keep spatter and zombie fingers out of your face, a riot helmet or motorcycle helmet might also be a good choice.  You will also want to wear gloves.  If you are concerned about pathogens touching your skin, you'll probably want some serious industrial PVC coated gloves. You'll also want to protect yourself by wearing a thick jeans, a water resistant jacket, and fully enclosed boots.  Unlike the survivors depicted in so many Zombie films and television shows, you'll actually want to decontaminate your gear and clothing on a regular basis.  You'll want to wash too!
Posted by GatorDude at 12:00 AM 1 comment: 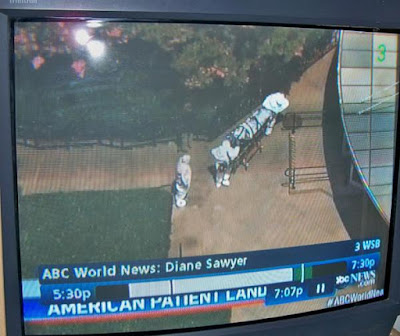 Defending Against Zombies - Defense in Depth

If you want to protect the old homestead against zombies, you need to have multiple layers of defense.  As season 6 of The Walking Dead shows, a single layer of walls is not enough.  Instead, you need to be able to fall back to defensible interior positions.

Think of the medieval castle as a model for fortifications.  A typical castle was protected by a moat, by exterior walls, by towers, by interior walls, and finally by an innermost defensive keep.  Beyond the castle model, you can also think outside the box.  You can also be protected by multiple defensive concepts such as concealment, alarms, walls, and escape routes.
Posted by GatorDude at 12:00 AM No comments:

The Walking Dead and its hero, Daryl Dixon, have really popularized the crossbow.  It's a powerful weapon and it seems like the perfect tool for wiping out Zombies quietly.

However, if you aren't careful with a crossbow, you can lose fingers, arms, an eye or even your life.  That's why I'm posting this link to a really good article on crossbow safety:

I'm also posting this article from Inside Archery:

It should go without saying, but all weapons are dangerous and you don't  crossbows are dangerous.  They are made to inflict serious damage to targets, big game animals, mounted knights, and even zombies.  Be careful!

Posted by GatorDude at 4:42 PM No comments: